Marais and the Violin 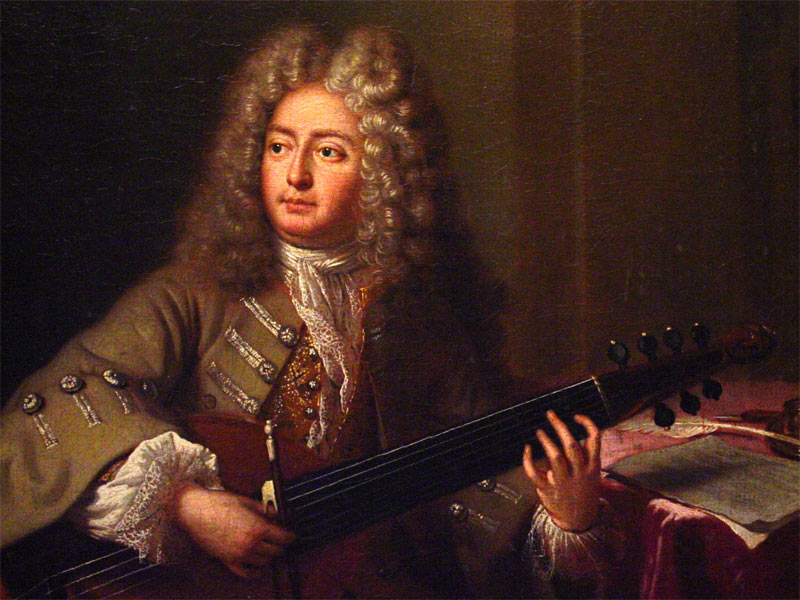 There were lots of prolific composers through the last few hundred years: Bach, Telemann, Haydn and many others you may care to list. Another name you could add is that of the Parisian musician Marin Marais, who lived a generation before Bach and Handel, being born in 1656. Like Bach, he was prolific in the boudoir (19 children by his wife Catherine) as well as in composing. A somewhat fictionalised account of his life and relationship with his teacher was widely seen in the movie Tous les matins du monde (1993).

Marais learned the viol from M. de Sainte Colombe, as well as composition from Jean-Baptiste Lully. Sainte Colombe is credited with many innovations in viol technique, shifting the thumb position down the viol’s neck from behind the first finger to behind the second. He also added a seventh string to the bass viol, extending its range downwards to a bottom A, a minor third below the cello’s bottom string. Himself a composer, Sainte Colombe left a book of duets for bass viols, many of which are highly imaginative and quite improvisatory in character.

Lully’s influence on Marais came through opera, and Marais was often asked to conduct performances of his teacher’s works. Marais also wrote four operas between 1693 and 1709 – all five act tragedies – which were very popular during his lifetime, and Alcione was seen as late as 1771 (Marais having died in 1728). Marais’ respect for his two teachers is seen in two exceptionally beautiful and passionate Tombeaux, found in his Pièces de violes, 2e livre.

The majority of Marais’ output is works for viola da gamba, and in the early years of the 18th century, Marais was the most important player and teacher of his time, holding various positions in the royal service until his retirement in 1725. His position was taken on by his son Vincent, one of two offspring who made his mark in music, the other being composer and performer Roland Marais. The vast bulk of Marin Marais’ compositions is found in the five books of Pièces de Viole, published between 1689 and 1725.

But viola da gamba was not the only instrument Marais wrote for. There are several significant works which include the violin, and these interesting and unusual compositions deserve to be studied and heard.

In 1723, when Marais was 67, between his fourth and fifth books of Pièces, he published another work: La gamme et autres morceaux de simphonie. Written for violin, viola da gamba and continuo, it features three substantial works: La gamme, Sonate à la marésienne, and La sonnerie de Sainte-Geneviève du Mont de Paris. In the light of the music, the translation of the French Avertissement into Italian is interesting and unusual, as his Prefaces to his Pièces de Viole were only ever in French. At this time of his life, Marais had developed a taste for the bizarre and unexpected, the satirical and the eccentric, proving him a “baroque” composer in the best sense of the word!

The full title of the first work is La gamme en forme de petit opera, or “The scale, in the form of a little opera”. This in itself is a departure from the norm of the dance suite or the sonata, though it was not Marais’ first exploration of keys; in his Book 4, the piece Le Labyrinthe explores many of the less-used keys. La gamme is based on scales, but passing through most keys: C, d, e, F, g/G, a, b, C/c/C, b, a/A, G/g, F, E, d/D, C. But interestingly, these key changes don’t coincide with the scenes of the opera. Marais talks in his Avertissement of dividing the work in halves, thirds or quarters, but in fact up to 45 sections can be distinguished. Various dance forms are there too: allemande, minuet, gigue, chaconne and rondeau, and also a fugue. There are frequent changes of tempo and mood, and of use of the instruments. Sometimes the viol is an obbligato instrument, blending in its top range with the violin, and at other times it reinforces the continuo, leaving the violin in centre-stage. While this is a very French piece, it also has lots of Italianisms too, with florid passages for the violin, imitative openings to movements and sequences. Whether this is a Parisian comment on Italian opera, or a merging of styles to attract a new audience, La Gamme deserves performance today.

The next piece in the book is the Sonate à la marésienne, for violin and continuo. At 10 pages (facsimile), it is much shorter than La gamme (36 pages in facsimile). The piece is predominantly in C major, though one section is in c minor. A mixture of dances (Sarabande, Gigue) and non-dance sections (Gravement, Tres vivement) provides variety without the extravagant key changes of La gamme. The Sonata and La gamme have been recorded by London Baroque.

The most famous piece in the book is La sonnerie de Sainte-Geneviève du Mont de Paris. Scored for violin, gamba and continuo, the piece is based on a three-note peal – d, f, e – on which Marais invents melodies, counter-melodies, ostinati and variations. There are only two modulations in the piece - a minor and F major – which makes these major turning points in the work. Again Marais varies the texture with the viol beginning by doubling the continuo, then branching off to join the violin, both in tessitura and virtuosity. There are quite a number of available recordings of this piece.

This is not all that Marais offers violinists. A much earlier collection: Pièces en trio pour les flûtes, violon et dessus de viole was published in 1692. These represent the first French trio sonatas, and can be played on any two treble instruments with basso continuo. These are available in facsimile from SPES, and are also soon to be published by PRB Productions in the US in a modern edition.

These six suites of mainly dance movements contain some truly exquisite music. If working from the facsimile, the uninitiated player may be taken aback by the sight of the treble clef slipping to the bottom line of the staff! This “French violin clef” is not difficult, and can be read as bass clef two octaves higher and is easily conquerable in a morning’s playing. Another minor visual disturbance is the doubling of certain key signature signs, for example, the f# on both top line and bottom space. Just ignore the extras.

There are yet further possibilities for the adventurous violinist. At the end of Book 4 of Pièces de Viole, there are trios for three bass viols. In his Preface to this book, Marais talks about other instruments performing his work, saying “If there are no viols, these same pieces can be played by the treble violin or the treble viol, even by two transverse flutes. It is also possible to mix these instruments, for instance, the flute with the violin or the treble viol, which can make a very pleasant chamber concert.”

This is precisely what was done by the San Francisco-based ensemble Music’s Re-creation on one of their many recordings for the Centaur label (CRC2334). Most of this movements are dance forms, with the odd prelude or character piece added. Marais’ music is only available in facsimile, but these facsimiles are quite exquisite engravings and are easy to transcribe or perform from, as most viol players do.

By the second decade of the 18th century, Marais was the undisputed master of the bass viol in France and was known across western Europe as an important composer. In his 550 pieces of the 5 books of Pièces de Viole, there is not a poor piece to be found. Next time you’re planning a concert of French baroque music, don’t just stick to Leclair or Couperin: try Marais.